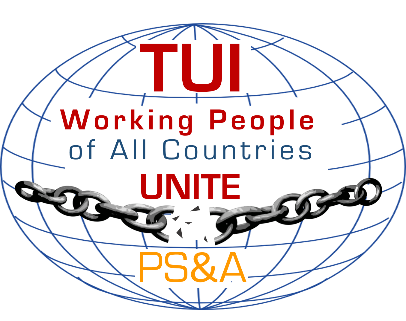 The Trade Union International - Public Service and Allied (TUI PS&A) expresses its solidarity to the USB and the working people of Italy and vows to mobilize all its continents and regions to fight in solidarity with USB in its great fight to defend the lives and health of Italian workers.

On the 11th to 12th March 2020, the TUI PS &A had its Directive Committee meeting in Johannesburg, South Africa in which, after intensive discussions, adopted historic declaration which made a call to all TUI PS & A affiliates and members to ensure that all governments comply with and implement the World Health Organizations’ consolidated package of preparedness and response to Coronavirus.

On the 25th March 2020, in taking forward the above aspect of our declaration and in ensuring that the Italian government complies with the World Health Organisation stipulations, the USB conducted a symbolic one minute strike action demanding that the Italian government must takes a step and protect lives and the health of all Italian workers and citizens by stopping all non-essential industries from operating during the lockdown.

TUI PS&A is angered by, instead of responding positively to the USB’s noble and life-saving call, the Italian government decided to launch a legal action against the USB, an act that essentially undermines worker rights and aimed at fundamentally demobilizing the trade union movement and thereby subjecting workers to all kinds and forms of abuse and exploitation.

The TUI PS&A calls upon the Italian government to desist from this backward action and instead work with workers to contain and ultimately defeat the COVID - 19 pandemic the whole world is now facing. Creating unnecessary confrontation with trade unions and workers is the last thing the country and the citizens needs at this critical period of this virus.

The TUI PS&A pledges its solidarity and stands ready to support all the efforts by USB and the workers of Italy to confront any behaviour by any institutions (including government and business) that seeks to defocus the workers energy away from confronting the greatest enemy of humanity in the form of the covid19 virus.