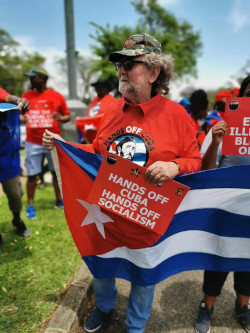 The National Education, Health and Allied Workers’ Union [NEHAWU] and the South African Communist Party [SACP] will demonstrate tomorrow at the embassies of the United States of America [USA] and Turkey in Pretoria.

The picket at the US embassy is part of the international campaign against American imperialist aggression in the world, and the genocidal blockade against Cuba, while the picket at the Turkish embassy is for the withdrawal of Turkey and all foreign militaries from their invasion of both the North Eastern region and Syria in general as well as to demand an end to the ethnic cleansing of the Kurdish people.

Details of the pickets:

Members of the media are encouraged to attend and to cover both pickets.