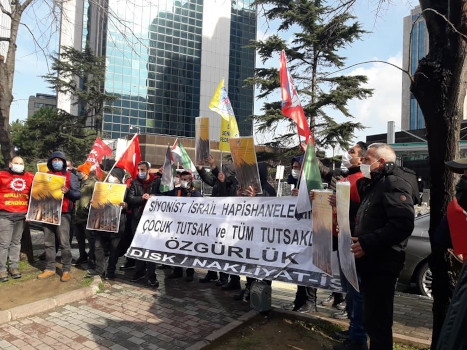 The National Education, Health and Allied Workers’ Union (NEHAWU) supports the campaign by the World Federation of Trade Unions (WFTU) for the release of all Palestinian children prisoners from Israeli jails.

According to estimations of Palestinians, there are 4 400 Palestinians detained in Israeli jails, including 39 women and 155 children, and about 350 Palestinians are being held under the Israeli administrative detention policy which allows Palestinians to be detained without charge or trial. The prisoners are being held in solitary confinement without humanitarian conditions while Israel has passed a law imposing stricter conditions. Furthermore, no measures were taken during the COVID-19 pandemic to protect prisoners in Israeli jails.

The reasons why Palestinians are being arrested is because they oppose the Israeli occupation of their territories and the criminal policy of Israel which daily subjects them to difficulties, dangers and restrictions.

As for child prisoners, since the year 2000, an estimated 12 000 Palestinian children have been arrested by Israeli forces in the occupied West Bank and held in Israeli military prisons many of them as young as 12 years old. In some cases, even children aged 6 and 7 have been imprisoned by the army. Israel brings before the military courts between 500 and 700 Palestinian children each year, while on average, between 200 and 300 children are held in Israeli prisons per month.

Children are violently arrested, abused, interrogated for weeks, intimidated, locked up in solitary confinement, asked to sign documents in Hebrew that they do not understand and not allowed to see their parents who sometimes lose track of them as they are constantly transferred from one prison to another.

The arrested children are also being interrogated, detained and tried by Israeli soldiers and military personnel. This violates international law, which stipulates that military courts may be used to prosecute civilians only temporarily. Despite signing both the 4th Geneva Convention on the Protection of Civilians in time of war and the United Nations (UN) Convention on the Rights of the Child, which provides for specific protection measures for children in detention, Israel is the only country to put on trial children in military courts without proper guarantees. The children, even when released, have problems with their physical and mental health due to their imprisonment and detention conditions in Israeli prisons.

As part of supporting the campaign by WFTU, we will be sending memorandum of demands to the Embassy of the United States of America, Israeli Embassy and the United Nations International Children’s Emergency Fund (UNICEF). Our memorandum are making the following demands: