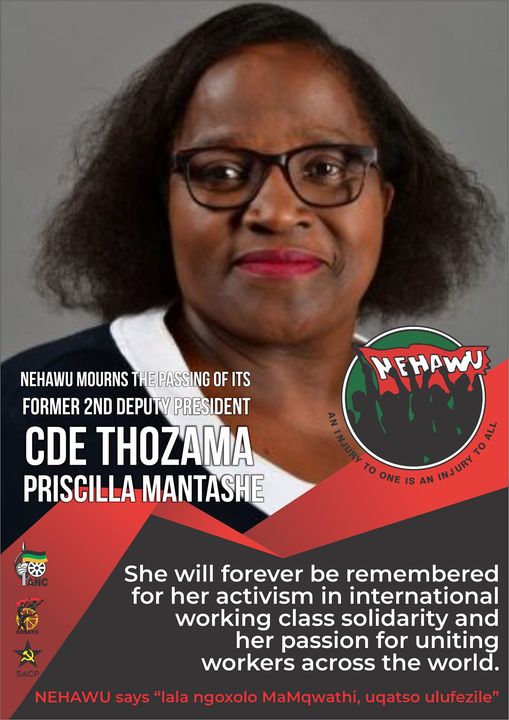 The National Education, Health and Allied Workers’ Union (NEHAWU) has learned with shock and sadness the untimely passing of its former 2nd Deputy President, Comrade Thozama Priscilla Mantashe. She lost her life last night due to COVID-19 complications.

The national union extends condolences to her family, friends and comrades in the Mass Democratic Movement (MDM). We wish her family strength during this dark hour.

Comrade Mantashe was an embodiment of the best traditions of the Congress movement, she was a worker, a champion of workers struggles, an activist and a leader of the African National Congress (ANC) and the South African Communist Party (SACP) and served the people without any expectation of material or personal gain.

Comrade Mantashe started as a shop steward of the national union at the Eastern Cape Department of Education in the Lady Frere District and was later elected as the Chairperson of the Mathew Goniwe Region and subsequently as the Provincial Deputy Chairperson of the province where she continued to champion workers struggles especially against exploitation and unsafe working conditions.

She was elected at the 9th National Congress in 2010 as a 2nd Deputy President and dedicated her energy and time on advancing the gender struggle including the obliteration of patriarchy. She was re-elected for a second term at the 10th National Congress. She was later deployed to serve in our National Parliament in 2014. Cde Mantashe served in both the 5th and 6th parliament and was currently serving in the Portfolio Committee on Trade and Industry as well as the National Assembly Rules Committee and Joint Rules Committee.

She will forever be remembered for her activism in international working class solidarity and her passion for uniting workers across the world. Our country has lost a dedicated leader who always strived to build better life for all especially women in the rural areas. Her demise should prompt us to redouble our efforts in the fight against Gender Based Violence, rape, femicide and violence directed at children.

In her honour, NEHAWU will intensify the struggle to end all forms of exploitation of workers by greedy employers including defending collective bargaining which is currently under threat especially from our government. On behalf of our members, we shall fight until the bitter end for the implementation of PSCBC Resolution 1 of 2018 especially clause 3.3.

The COVID-19 pandemic has once again robbed us of one of own. On a daily basis we continue to grieve the death of our loved ones because of this invisible enemy. This further necessitates for all of us to be more vigilant and to protect ourselves and our loved ones. In this regard, we continue to appeal to all our people to a wear mask, sanitise their hands and to observe social distancing.