NEHAWU Strike At NSFAS To Commence on 28 October 2019

The National Education, Health and Allied Workers’ Union [NEHAWU] will be embarking on a strike action at the National Students Financial Aid Scheme [NSFAS] as from tomorrow morning after serving the employer with a notice to strike on the 18th October 2019.

The national union has been engaging with the employer on a myriad of issues that to date remain unresolved. After protracted and failed negotiations at the National Bargaining Forum [NBF] we approached the Commission for Conciliation, Mediation and Arbitration [CCMA] to intervene. The CCMA issued NEHAWU with a certificate to strike after parties failed to find common ground on the issues of dispute.

NEHAWU members will embark on an industrial action after a successful balloting in line with the Labour Relations Act [LRA]. The strike action will continue indefinitely until the following demands are successfully met by the employer:

Our members have been patient with the employer with the hope that things will turn for the better but instead of improvements their situation is turning dire by the day. The employer has been preoccupied with isolating and victimising our members who have been at the forefront of exposing corruption emanating from the lack of an accounting system and an IT system [Sbux] which is intended to disburse funds to students. One of our members has been suspended for informing the Department of Higher Education and Training [DHET] about the maladministration taking place at NSFAS.

Members at senior management continue to resign from the institution in order to save their careers away from corrupt instructions. Majority of staff responsible for disbursement of funds have also been suspended for refusing to carry irregular instruction.

The nation union can unequivocally confirm that the staff morale at NSFAS is at its lowest and members are working in fear now that the administrator intending to vet all staff members without consulting the union. The institution has procured the services of special advisors to the administrator to assist in the transfer of skills to workers, however, this has not taken place and the same employees who were to be given skills by these advisors are the ones training them while they earn between R1.4 million to R2 Million annually and enjoying luxurious apartments paid by NSFAS. As if that is not enough, NSFAS is still to release their audit report for the period 2018/2019 and it is our view that the reason for the delay in releasing the report is because of the irregularities that are taking place in that institution. 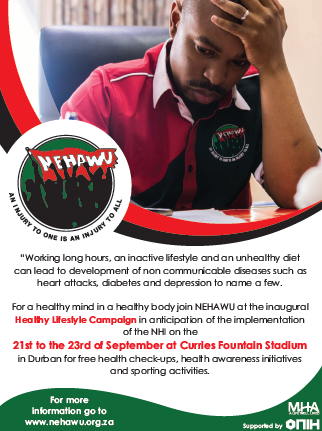 NEHAWU Health Campaign and how it interlinks with society.

Non-communicable diseases in the workplace.